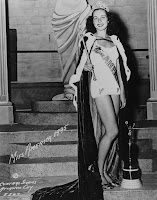 MISS AMERICA’S UGLY DAUGHTER by Carol Kaufman Segal
Bess Myerson was crowned Miss America in 1945, the first and only, Jewish contestant to win the pageant.  The title of this play, Miss America’s Ugly Daughter, written by her only daughter, Barra Grant, and performed by her, elicits a vision of an unattractive woman.  However, that is far from the truth.  Ms Grant is a lovely, charming, and talented woman despite her years growing up under her narcissistic and unaffectionate mother.
Barra’s story is told in flashbacks of phone calls from her mother in her later years, calls that come during all hours of the night and into the early morning (the voice performed off-stage by Monica Piper).

Berra’s mother was constantly critical of her from her early childhood.  She never thought her daughter was pretty, and did not fail to make her aware of those feelings.  She lived her life in the shadow of her mother throughout her years growing up.  Myerson was always much too busy with her own life to dote on her daughter. After winning the crown, Bess Myerson’s life became public.  She appeared on numerous television shows, became New York City’s First Commissioner of Consumer Affairs, an adviser to Mayor Ed Koch, served on presidential commissions, and ran (unsuccessfully) for the United States Senate.  Unfortunately, in her late 60‘s, she became involved with the wrong man and was indicted on bribery and conspiracy charges.  After a highly publicized trial, she was acquitted.  This proved to be her downfall until she passed away at the age of 90. 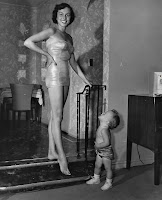 Barra wrote this play as a comedy.  Undoubtedly through it all, as revealed in her story about the late night phone calls and despite all, she has had the spirit to forgive.
Miss America’s Ugly Daughter is playing Saturdays at 8 PM, Sundays at 5 PM, and Mondays at 8 PM, through March 24, at the Greenway Court Theatre, 544 N. Fairfax Ave., Los Angeles.  Tickets are available online at MissAmericasUglyDaughter.com, or by calling (323) 285-2078.

Posted by Speaking of the Arts at 1:45 PM