TO DAD WITH LOVE: A TRIUTE TO BUDDY EBSEN by Carol Kaufman Segal

After Ebsen’s death, his daughter, Kiki Ebsen, discovered an old trunk in her parent’s attic years after they had both passed away.  The truck was full with her father’s past -  memories she could not get out of her mind.  After two years, she began to envision a show in which she could pay tribute to her father by telling the story of his life..  Thus, To Dad With Love: A Tribute to Buddy Ebsen, created by Kiki Ebsen and her brother, Dustin Ebsen, playing at Theatre West.

The tribute is told via full-size pictures on the stage as she relates the events that occurred during his lifetime.  She intersperses with singing as she accompanies herself on the piano, as well as sometimes being accompanied by a four piece jazz ensemble (Jeff Colella {piano}, Kendall Kay {drums}, Kim Richmond {woodwinds}, Granville “Danny” Young {bass}).  Kiki has a beautiful voice as well as an exceptional stage presence. 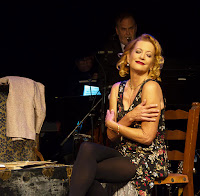 I loved seeing the pictures that made me recall times past such as the very tall Buddy Ebsen tap dancing with little 6-year old Shirley Temple.  They were both fantastic!  The scenes from Breakfast at Tiffany’s with Audrey Hepburn proved his acting prowess.  I loved seeing the films from The Wizard of Oz.  However, the story about how Buddy Ebsen was supposed to have been the Tin Man in the movie, but due to a health issue, had to be replaced with Jack Haley, had to be a bitter pill. 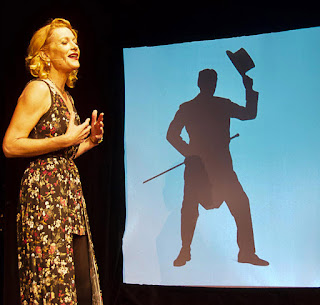 The entire production is wonderful and gratifying, but the most emotional part comes at the end when, behind a screen, a silhouette appears in the mode of Buddy Ebsen.  When the silhouette emerges from behind the screen in the form of Buddy Epsen (Gregory Gast), he and Kiki Ebsen performe a duet tap dance number that can only bring tears to one’s eyes.  This wonderful, as well as delightful and informative, production is directed by S.E.Feinberg.  Special effects are by Dustin Ebsen.
To Dad With Love: A Tribute to Buddy Ebsen, plays Fridays and Saturdays at 8 PM, and Sundays at 2 PM, through September 22, at Theatre West, 3333 Cahuenga Blvd. West, Los Angeles.  Tickets are available online at buddyebsentribute.com, theatrewest.org, or by calling (323) 851-7977.

Posted by Speaking of the Arts at 3:38 PM