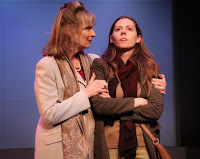 The Spanish Prayer Book, written by Angela J. Davis and directed by Lee Sankowitch, is making its world premiere at The Road Theatre on Magnolia.  It is based on real events that occurred following World War II.
Michaela Adler (Allison Blaize) is an atheist even though she was the daughter of the late Rabbi Jacob Adler (Allan Wasserman) who recently passed away in London.  She has made a trip there to deal with some rare volumes of Jewish manuscripts that, prior to World War II, belonged to a Jewish Institution in Germany.  These precious, and valuable books, were smuggled out of Germany by Jacob’s Father, Alexander Adler (Carlos Lacamara) before the Germans could destroy them.  He also smuggled out the young, pregnant librarian, Channa Wild (Tiffany Wolf) who was the only living sole still in the Institution when they escaped. 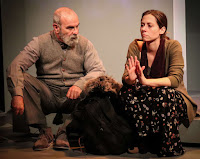 Joan Adler (Laura Gardner), has been separated from Michaela’s father for years, and Michaela, herself did not get along with her difficult father. Michaela recently lost her teaching job and is only working part time.  She also has a daughter with some medical issues that has her in financial straits.  Because of her situation, Joan has arranged for the manuscripts to be put up for auction in London to help Michaela, but naturally, they both have to agree to do so. 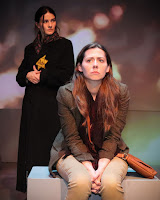 In the process, Michaela meets Julien (Richard-John Seikaly) a Muslim scholar who was her father’s assistant and who is an expert in rare antiques. They become romantically involved which puts Michaela in a quandary since Julien is against putting the manuscripts up for auction and tries, strongly, to convince Michaela not to do so. 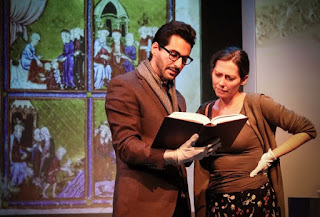 The actors are absolutely marvelous in their roles.  Amy Tolsky plays several roles.  However, the night I saw it, she performed only the role of the Law Clerk.  Her other roles, that of the Customs Official and the Auction House Assistant were performed by Nancy Fassett.  Allison Blaize is exceptional to me because I could see real tears in her eyes during moments of her performance.  The splendid scenic design and projections are by Yuki Izumihara.  My dilemma with the play happens when the no-longer-living people from the past show up a number of times during the production, often making it quite difficult to follow.  I suppose I could say it is the structure of the play that does not run as smoothly as the performers themselves.
The /Spanish Prayer Book plays Fridays and Saturdays at 8 PM, Sundays at 2 PM, through November 23, at The Road on Magnolia, 10747 Magnolia Blvd., North Hollywood.  Tickets are available online at www.roadtheatre.org, or by calling (818) 761-8838.

Posted by Speaking of the Arts at 8:42 PM