A PICTURE OF DORIAN GRAY by Carol Kaufman Segal 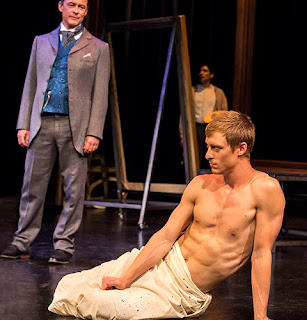 Oscar Wilde’s novel, The Picture of Dorian Gray, was first published July, 1890 in Lippincott’s Monthly Magazine.  However, the editor of the magazine deleted some five hundred words of it without the author’s knowledge, worried that British book reviewers would find it morally offensive.  Wilde defended his work and art while revising and lengthening the story that was published as a book in 1891.  Not a wonder that it was considered blasphemous in those days.
Dorian Gray (Colin Bates) might have been better off looking for the Fountain of Youth, but I dare say he had no idea what effect his wish to remain looking young would have on his life.  Dorian is a handsome and wealthy young man.  Lord Henry Wotton, known as Henry (Frederick Stuart) is visiting the studio of his friend Basil Hallward (Amin El Gamal), a painter, who is in the process of painting a picture of Dorian.
Henry is taken with Dorian’s beauty and of the painting.  Dorian, himself, is so much aware of his youth and beauty that he wishes he could keep from growing old.  He says that he would give his soul if the painting would grow old instead of him.  (Guess we should think twice before we wish for something!!)   Henry latches on to Dorian and they become intimate friends.  All the while Henry has a marked influence on Dorian and his persona. 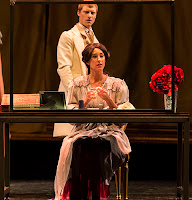 Dorian meets and falls in love with Sybil Vane (Chelsea Kurtz), a beautiful actress, and they become engaged.  After seeing her perform on stage, he heartlessly breaks off their engagement.   When he arrives home, he notices his portrait has changed, and  suddenly feels guilty about his treatment of Sybil.  He decides to write her a letter expressing his feelings and love, only to discover the next day that she had committed suicide.
But influenced by Henry, Dorian no longer feels guilty about his behavior towards anyone.  Men and women worship him; he is attracted to both, but cares about no one.  Eighteen years go by and as they do, his picture ages continuously.   Though his looks decline in the painting, it is Dorian who morally declines throughout the passing years.  Living such an unscrupulous life is bound to end tragically. 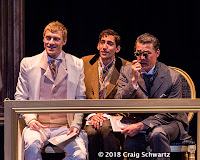 This stunning production is brilliantly directed (and adapted) by Michael Michetti who says, “This is not the story of a rotting portrait; it is the story of a rotting soul.”  What make this production so unique and artistic is as Michetti points out, is that “This adaptation uses elements of Greek Chorus and narrative dance, and the Victorian setting is filtered through a very modern sensibility, allowing us to tell this familiar story in a way that’s highly theatrical and has a distinctive style and point of view.” 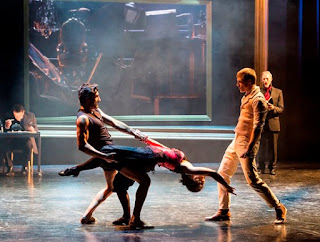 This picture of Dorian Gray is not a portrait, but a full body image, and Colin Bates, who is perfect in his performance as Dorian Gray, is seen on stage posing ala natural for the painting.  A strong cast also includes Deborah Strang, Justin Lawrence Barnes, Daniel Lench, Tania Verafield, Amy Tolsky, Jose Angel Donado, Dale Sandlin, and Abe Martel.  The play runs 2 hours and 40 minutes; I believe it would be well to make some cuts to shorten the time.
A Picture of Dorian Gray plays through November 16, at A Noise Within, 352 E. Foothil Blvd., Pasadena.  For tickets and information, go online at www.anoisewithin.org, or call (626) 356-3121.

Posted by Speaking of the Arts at 5:21 PM