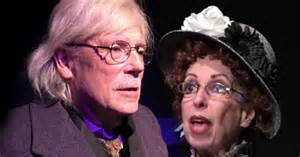 ALEICHEM SHOLOM!  The Wit and Wisdom of Sholom Aleichem by Carol Kaufman Segal
Sholom Aleichem (Translated from Hebrew as a greeting “Peace be with you”) was the pseudonym of Sholom Yakov Rabinovitz,  born February 18, 1859, in Pereyaslav near Kiev, Ukraine, in the Russian Empire.  He became a leading Yiddish author and playwright, the first writer to use Yiddish, the popular language of the people. 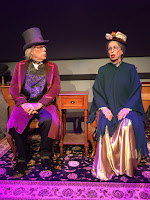 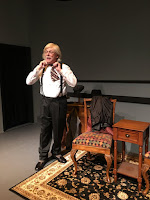 Based on the writing and letters of Sholom Aleichem, the production features Chris DeCarlo as Sholom Aleichem in his later years as he journeys through Russia on a speaking tour, accompanied by his wife Olga (Evelyn Rudie).   She handles his schedule and worries over their finances as he entertains audiences with his wit and storytelling.  The play is interspersed with wonderful songs, and even some dancing by both DeCarlo and Rudie as their story plays out.
It is a wonderfully written musical play, beautifully performed by DeCarlo and Rudie, who bring Sholom Aleichem, Olga, and other characters they portray, to life. 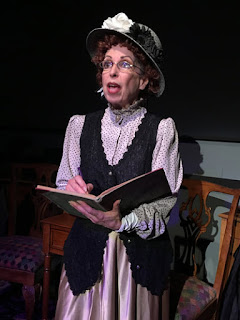 Chris and Evelyn are exceptionally talented in every facet of the theater.  They are wonderful writers, directors, musicians, actors, singers, quick at changing characters and costumes, running a theater, teaching their skills, and I could go on and on.  Chris is celebrating 53 years with the Santa Monica Playhouse this year.  Evelyn was a child star by the age of six and has appeared in many TV productions, movies, and has a star on the Hollywood Walk of Fame.  This year, the husband and wife team celebrated 45 years as co-directors of the Santa Monica Playhouse,
This play has been playing to full capacity at every performance since it opened in May of this year, and has been extended several times,  If you haven’t seen it yet, you are in luck as it  has recently been extended through November 17, with performances Saturdays at 7:30 PM , and Sundays at 3:30 PM, at the Santa Monica Playhouse located at 1211 4th Street, Santa Monica.  Tickets are available by calling the Playhouse Box Office at (310) 394-9779, or online at SantaMonicaPlayhouse.com/aleichem-sholom.html.